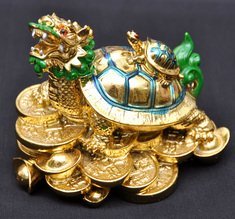 I’ve done quite a number of feng shui audits now and my clients always ask me if feng shui items are able to remedy the problem areas of the house. Personally, I’m not an advocate feng shui items being cures, and I would like to take this opportunity to categorically say that there is no Chinese classic out there that has mentioned that items can work or turn your life around. The study of feng shui has always revolved around the Yin-Yang and 5 Elements theory, the structure of the house and astronomy.

Many people do not realize that the positive effect that feng shui items seem to bring actually comes from our own mindset. I do agree that feng shui items can have a very positive impact on someone, especially in terms of the fee-good factor psychologically and mentally, but intrinsically it is just a decorative item. The point that I’m trying to drive at is that if you’re looking to really change your life, start with your mind. We underestimate what changing your perception can do to one’s life – we call this 转念。The reason why many people feel that feng shui item work is because they had a change in the way they perceived reality, and every positive event was magnified and credit given to the expensive auspicious feng shui product they purchased. If feng shui items really did work so well, I would have been a millionaire by now.

So how do you remedy the problem areas of the house? Very few people know that you’re fated to stay in the current house you’re in, which is precisely the reason why people have such high regard for feng shui in the past as they want to alter the course of their fates. Let me give an example of this correlation between your BaZi chart and the feng shui structure of your house. Below is a case study of one of the feng shui audits I’ve done earlier this year:

The above case study belongs to a male client of mine who recently bought a HDB flat in Pasir Ris. Let’s do a quick analysis of his BaZi chart: The BaZi chart has an overwhelming presence of Fire with a very strong 丙 Fire Daymaster. For male charts, 财/Wealth represents the spouse, which in this case is Metal. As such, the above chart is very unconducive for Metal to exist as it is constantly under assault by Fire, so the manifestations of such a chart would be that the woman my client ends up with would, generally speaking, not be doing so well in life.

Now for the interesting part. I audited the house my client bought and found the following – the position of the main door and master bedroom are in good positions, however, the kitchen lies in the Southwest sector. The Chinese classics points out:「坤灶木土相克，阴人不利。」The kitchen is in the 坤 (Southwest) position which is of Earth, whereas the main door is in the 震 (East) position which is of Wood – there is a clash between the elements here and as 坤 represents the woman in the house, this house will not be suitable for women, especially the eldest woman of the house, which will most likely end up being the wife since my client’s parents stay elsewhere.

The interesting thing is that the BaZi chart and the feng shui of the house points to the same direction and has very obvious parallels. My client is still single, and I’ve advised him to move out of the house should he wish to increase his chances of finding a partner and get married; I’ve also advised him to not let him mother move in with him given the nature of the house. More importantly though, I told him to not let the house feng shui bother him to much, but to focus his energy into knowing how to pick the right partner and treat her right, and also to take practical steps to take care of his mother’s health.

We can try to influence the course of how things unfold by picking a house with good feng shui, but for the majority of us who do not have the resources to do so, being aware of what’s to come and to make preparations for it such that we can make the best decisions for ourselves is the wisest and most practical thing to do.

The history and development of feng shui can be traced back thousands of years, and unfortunately it has went down the wrong path and time went by and a lot of misconceptions have been propagated. Don’t get me wrong – I am still an advocate of feng shui and I know how much it can impact someone’s life, just that there are certain things in the modern world that I’m very against and it’s rather unfortunate that some feng shui masters out there regard items and charms as a proper practice.

I really wish feng shui items worked – imagine what I can do for myself with it! The Interconnection Of Everything Chinese Metaphysics: The Origins Of The 8 Trigrams & 64 Hexagrams

If one believes in Chinese metaphysics and astrology, it's natural to assume that one has to believe in the interconnection of all things as well. They are not mutually exclusive. This belief that everything is interconnected might sound like a new age religion, but...

I've been spending a lot more time thinking about feng shui, especially given the recent discovery that the Chinese sages might be wrong about when Period 9 starts. The Home And Decor interview also gave me a nudge in wanting to talk about feng shui a bit more. I know...

When Feng Shui Period 9 Starts: Why Every Feng Shui Master Got It Wrong

Feng Shui Period 9 is a term you'll hear getting thrown around a lot these days because 2024 is around the corner, but I've recently made a discovery that will change not only the way people look at feng shui, but also the industry and this field as a whole. The...